The time draws nigh for the trip south and the weather is beginning to remind us of that fact. Orion is showing up early each clear night along with this year’s brilliant Mars. The trees are turning color quickly.

That’s the view a couple days back from the dock. There are more and more red maples showing and growing on the ridge. The lake level is doing its annual fall monsoon rise too. The rain just keeps coming. We’ve had a few wind and rain events since the picture so all the red have been cleared.

We got a really great sunset pic from one of this years guests I must share. 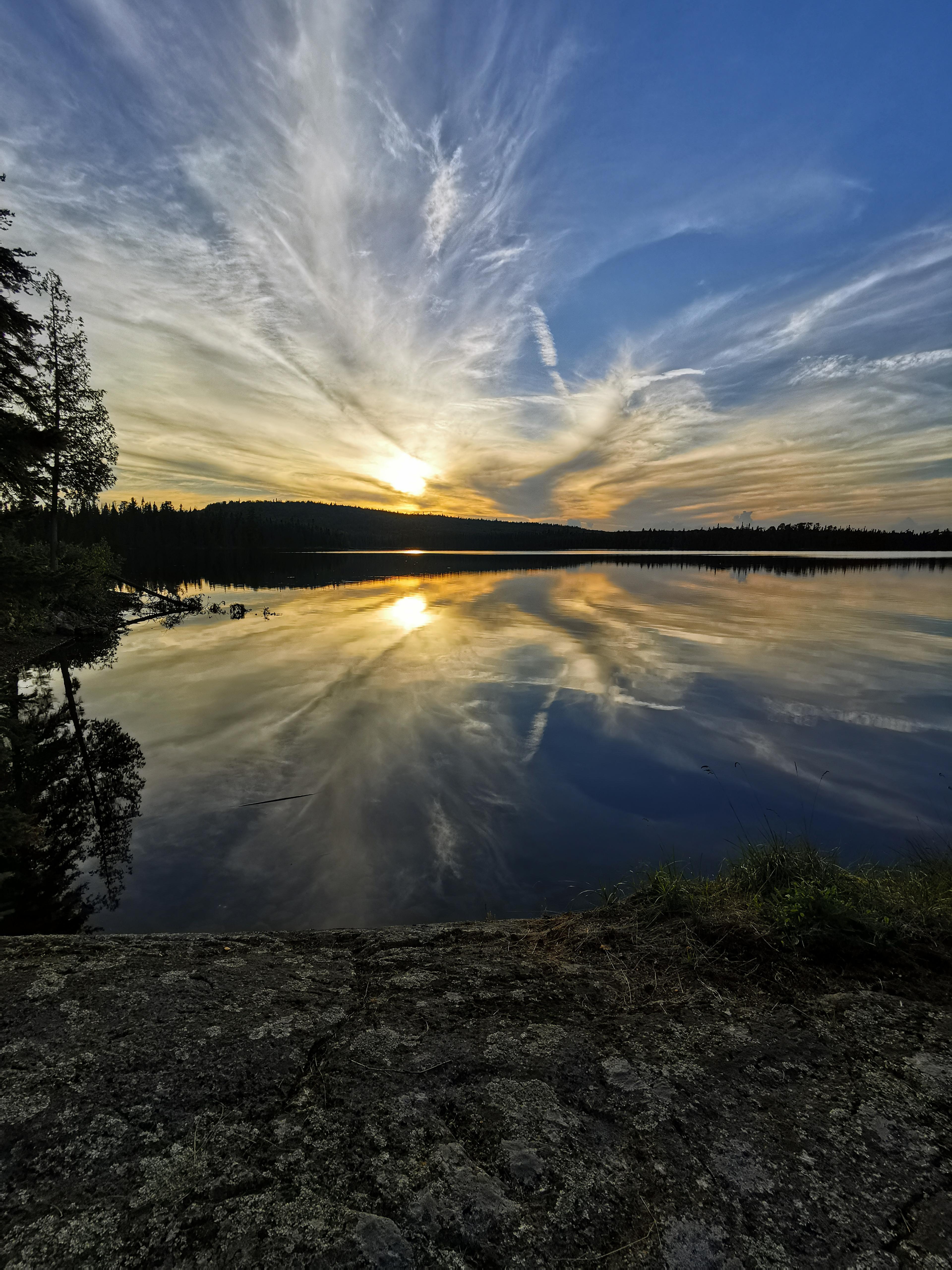 Pretty amazing eh? I am not a fan of sunset pics but this one is out of ordinary.

Even with the crappy weather we haven’t been idle. Janet runs Kevin daily after he does the morning rounds and chores with his dad.

We place the trapped mice of the stump for the crows. Walk around camp so that Kevin can point at the bunnies and run after crows. The bunnies are completely unafraid of Kevin because he just points at them! We’ll be walking to the shop, see a bunny and Kevin will freeze and point at it from about 30 ft. (perfect form on the point too) I’ll go into the shop and rummage around for what I need emerging about 4 mins later to find Kevin still pointing and a bored snowshoe hare eating clover blissfully as he gazes at a frozen Kevin. The impasse is generally broken when I walk past Kevin on my way to the house and the bunny bolts. Kevin then saunters up to where the bunny was sitting and then walks over to where he went into the bush! Wow way to put the threat of death into them! But hey its hard work. Kevin also has to meet with foreign dignitaries such as the Sultan of Janetron. 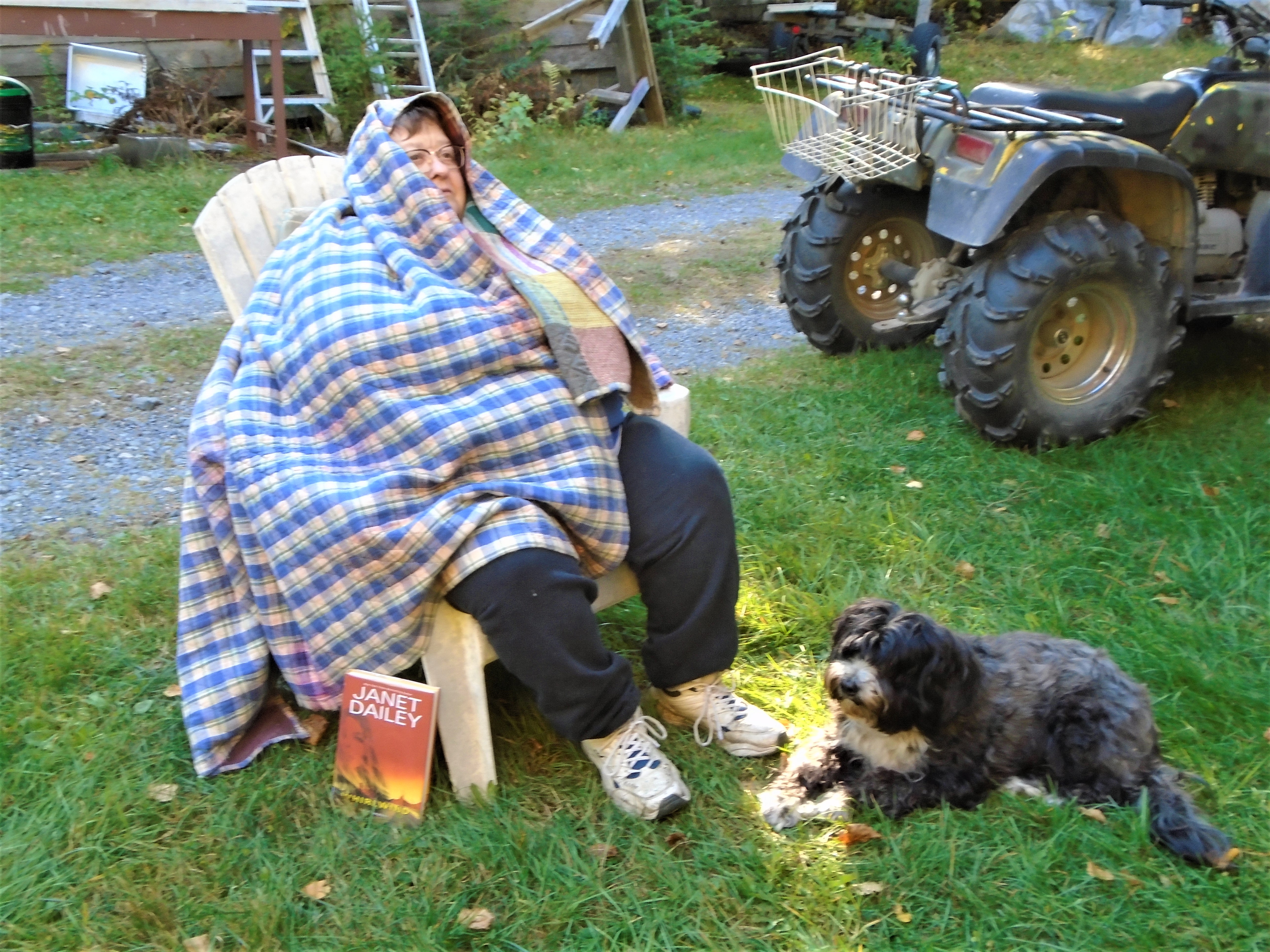 He and the Sultan are attempting to coax an nasty monkey off of the roof of the shower.

Soon after this picture was taken a lynx was spotted crossing the drive about 40 feet away from us toward the lodge! It was an extremely well made young female about the size of a standard poodle. I had Janet take Kevin to the beach and I picked up my framing hammer and went up to where she was. She was standing without any fear looking at me no more than 20 ft away. I yelled and waved my arms – she decided to sit down for the show. Jeesh I get no respect! So I walked toward her and she then decided to leave. When I recounted the story to guests in camp they asked if I wasn’t afraid that she may attack me – LOL nobody messes with an old fat guy with an Estwing framing hammer!

Actually The Evil One and Kevin are keeping an eye on the old guy putting a roof on the shower. You see if the old guy falls off the roof it would be absolutely hilarious! And The Evil One wouldn’t miss it for the world. Also other peoples misfortune must be witnessed to be funny. Kevin does take this seriously too. After I finished the shower and was working on the porch of cabin 10 he spent quite a bit of the afternoon sitting in the van with The Evil One. She read her book waiting for the thud and moan portion of the days activities and he sat in the driver’s seat watching his dad. It was cool out so they wanted to be comfortable.

Here I am mugging in front of the new shower roof.

Kevin’s other morning chores include burping the water pressure tank and getting the lake temp. He will trundle right out onto the end of the dock and watch as the thermometer is checked if the lake is not too wavy.

On this particular day he also had the added duty of going to the dump. We also invited “The Sultan” for the outing. 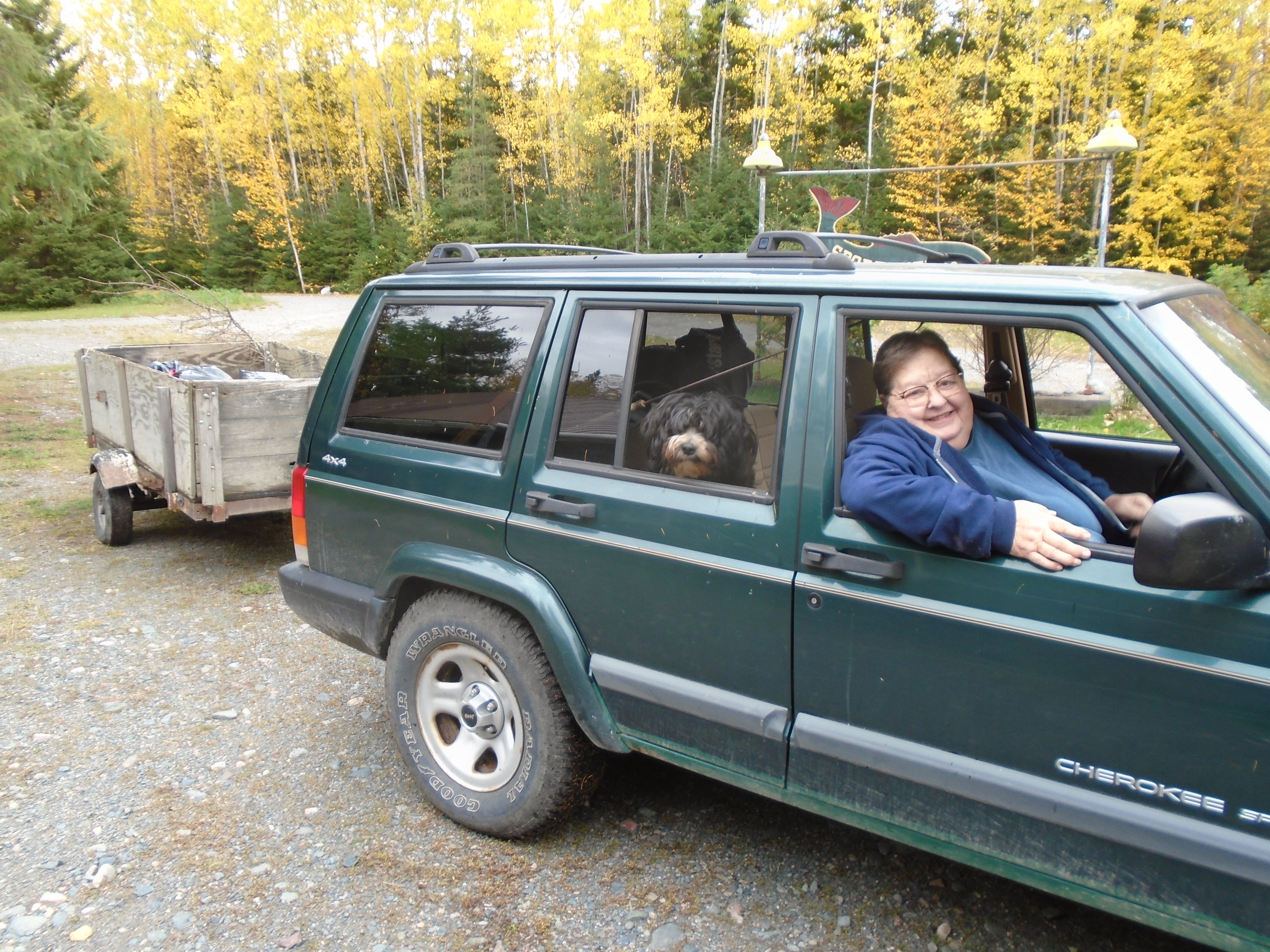 Here they are loaded into the limo and ready to roll – the secret service chase vehicles are to the right out of frame.

The day always ends with the completely exhausted Kevin roughing up The Evil One’s bed and having a good snooze. Its even better if he is wet from running around in the rain with dad.

So it would seem that my life is being lived through the dictates of a crazy little dog, but it just isn’t so, he only illustrates the joie de vivre that we still have for being in this most wonderful of places.