The stage was set the other night, starkly clear, slightly cool, no wind and the moon had set – it was between 4:00 and 4:30 in the am (as Dad used to say). I shut down the diesel and went over to open the valve on the gravity tank. There in the sky was the bright beacon of Venus with a bright Mercury nearby and not too far away the pair of gas giants Saturn and Jupiter were bright and brighter! A little farther to the south Mars was the blood red light in the sky. Really quite breath taking — all of them at once. I can’t say that I have seen Venus brighter. Very cool stuff! First comet NeoWise and now the meeting with the “Big Five”.

We’ve been pretty busy here last few days – the Becketts occupying three cabins and some campers from Toronto. So there was fishing, and teens swimming and fun and games at the beach. We decided to have a pizza day. I needed to fire up the oven to clear the moisture from the masonry anyway. But wait — Joan isn’t here to get the dough ready with her big ass stand mixer! Soooooo The Evil One got several pizza dough recipes from the net and I amalgamated one from them and mixed it up. 18 cups of flour – that’s a pretty big blivot of dough! But I hand kneaded it and then it raised beautifully and was ready to be used later that same afternoon. It made really nice pizzas too. Puffing slightly on cooking and browning nicely as well as cooking through for no doughy texture. Veddy Naice!

When firing the oven for baking pizza I don’t do temperature numbers – I watch the state of carbonization on the inner oven dome surface. Once the dome looses its coating of carbon and appears as clean fire brick I know that the oven it to working temp and away we go! On checking the inner dome I realized that my inspection of the oven for repairs was not thorough. The refractory “keystone” piece at the oculus of the inner dome had deteriorated and fell out. The layer of insulation between the refractory and the outer slip was showing. It did not and would not in the future affect the oven’s performance, but its best to repair these issues before they get worse. A wise man once quipped – “A stitch in time saves nine.” I fixed it today by working some of the ceramics clay that Bob brought up into the gap. I worked a chunk big enough to fill the gap with some water and pushed it into place – then wet my hands and smoothed it even with the dome surface – close any way. After about a weeks drying I’ll refire the oven and set the repair in place (hopefully). If not I’ll trim a piece of fire brick (collected from the dump) and mortar it in place.

Its cool today. Overcast and a brisk north wind. Ten inch waves are attacking the beach and the flag is standing out. Shorts and tee shirt are fine up at the lodge but sweat shirt and pants are more the style at the beach!

so now some pictures.

A nice group of fun fishing from the dam.

Lyle presides over and helps with the fileting. 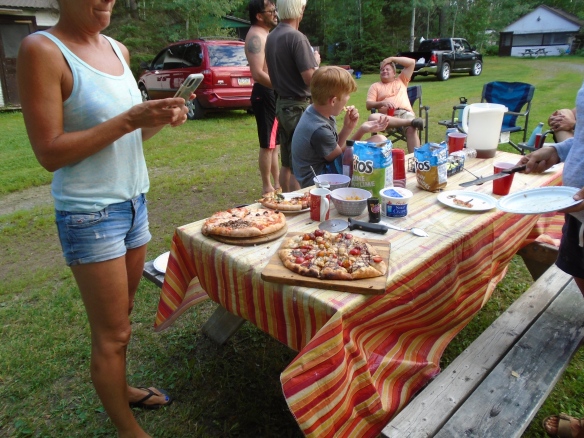 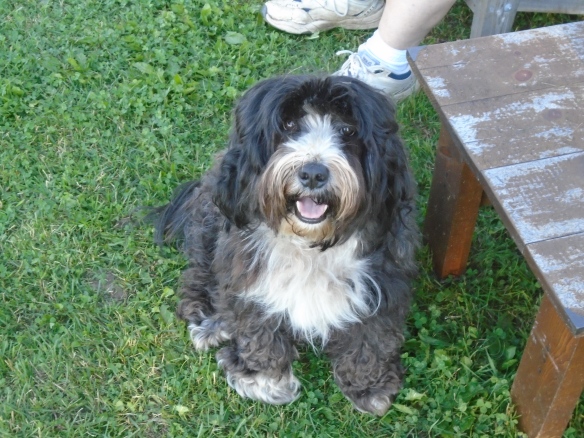 As with blog policy its always good to leave the reader with a happy boy picture! Kevin loves it here as much as we do.

3 thoughts on “A Meeting With The Big…”