Already gorgeous lilies. (yeegads!!! Sounds like the beginning of another horrendous haiku!)

It’s a cool day up north – mid to upper 60sF when its drizzling and low 70’s when the sun is out. When I was tending the bonsai and vegetable garden this morn we had a small shower. Not enough to compel anyone as stout hearted as me to go in but a shower none the less. I went over to see the latest openings on the day lilies and was in awe of of how great the blooms looked after a slight mist of rain in the new sun. Its no wonder those models are sprayed with water and have a fan on them! I ran in the lodge and got my camera for some art shots LOL and took some down at the beach of the billowing tall clouds over Firth. 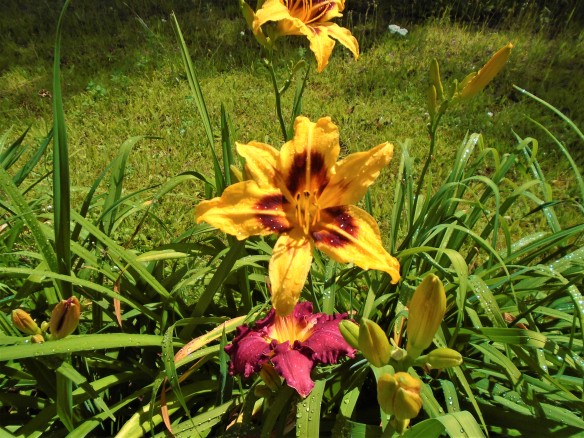 One of the prolific more classic lilies with a deep red in the foreground. 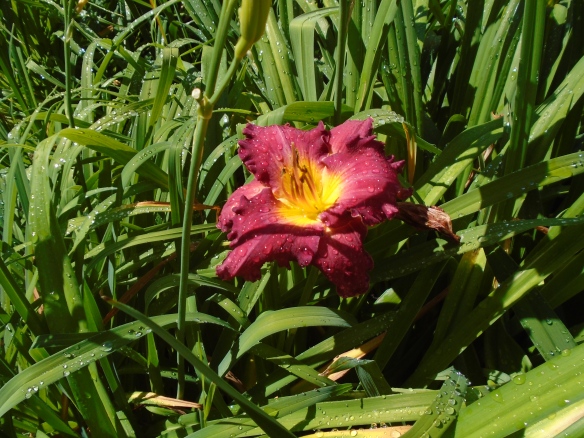 One of the three really deep red with yellow center plants. My favorite because of the  yellow/red contrast. Nice sized bloom too.

Really cool lightly colored ruffle edges and contrasting center. Check out the little devils below it.

Here’s a shot of the cute little devils – they like to bloom together – not real showy but they have chutzpa!

I have 3 plants of the white – to super light green lilies this the first to bloom. I think one of the other two puts out a big-ass bloom. This one isn’t small buts dainty. 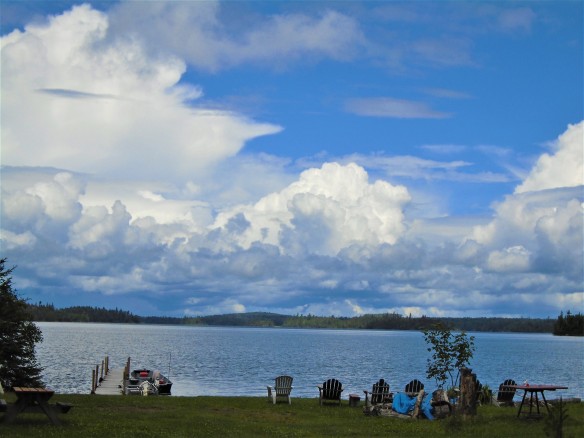 Check out the clouds at the beach. The clear clean air and the billowing cumulonimbus clouds are fabulous.

After I shut down the power I always take a look around at the stars and scan the edges of the bush with my flashlight to see lynx, bear or fox eyes. I also go over and check out the garden and turn the flashlight into the air to watch the little bats swoop down to pick off mosquitoes trying to bite me. Often times they come so close that I can easily hear their wings massaging the air. The other day as I was looking at the stars and planets without any light I noticed a red light through the trees behind the diesel house due west from where I was standing in front of the store. Very odd! It was only about 12 feet up and the light found its way through the trees for me to see. It was 2 to 3 lights or the trees were breaking up the source. Mystifying! I jumped on the 4 wheeler and went down to the beach – went out on the dock and there the culprit was. The red  half moon was setting directly in the bottom of the “pass” that the road goes through the west ridge! The air was so clear that the red moon was bright as could be even at the horizon. Very cool stuff – I think I am seeing Mars every night as there is a bright red planet to the south around 2 am. I’ll have to check it on the web. Its so red that I assume its Mars though. 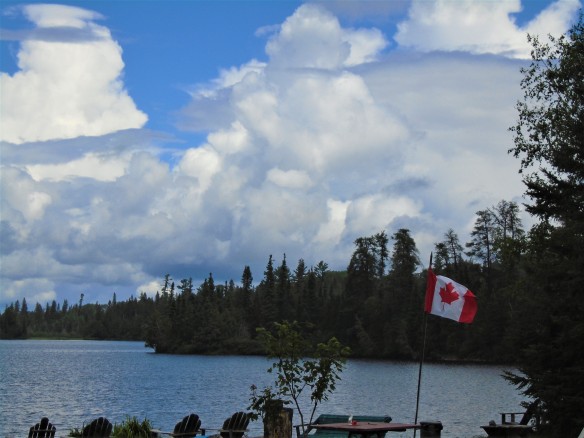 Last picture is another at the beach of the clouds and the beautiful Canadian Flag stretched by the small nor’westerly. Its a light rainy day but I may still have a drink down by the beach later…