But there are certain provisos.

The Black flies and mosquitos are in such abundance that the dragonflies are not winnowing them down as quickly as in past years. We have a nasty intersection of all the bad bugs still in evidence – blackflies, mosquitos, deer flies, horse flies, no-see-ums and the dreaded ankle biters! Singly any one of the group are not too too bad but all of them together……..eeeuwww! During the day its fine but dare not to traverse the bush! The mosquitos are hanging out like revelers at Obama’s inauguration! (I wish they were more like the idiots at the Criminal’s one – The dragon flies would eat them up in a couple hours!)  The days have been warm to hot and the sun is glorious. The lake temp reached 78F today so the swimming is fantastic. I generally check the lake temperature whilst the diesel is warming up for its day of powering the camp. So Kevin and I walk down to the beach – “burp” the water pump so that it runs well and walk over to the East (right) dock go out to the end pull up the thermometer to read the temp at about noon. Yesterday was gorgeous, about 75F clear as crystal with a very slight breeze. The nesting tree swallows were busily swimming through the air nabbing insects for their brood and the bass were working the shoreline shadows for bugs falling from the trees. Normal stuff. But this time was a little different. I lift the thermometer out of the lake pretty quickly as I find it easier to rise from a crouch that way and as the 7″ long thermometer rose out of the water a pike about 30″ long lunged from under the dock beneath my feet trying to devour it! Well I just about shit my shorts! LOL I was visibly shaken – but after reading the temp I dangled the bait without any follow-up.  He must have caught sight of my gaping surprised mouth as he resubmerged (probably enough to scare anyone).

The big news in camp today is that Lyle and Ruthann saw a mother mink and her 4 kits walking up and down the beach as they enjoyed the afternoon! Kevin was with us on the dump run so there was no interference. The red squirrel and mouse population is very low in camp this summer. So it maybe as a result of Mama Mink diligently feeding and teaching her pack of ravening minky adolescents the ways of the hunt. Joan has also caught several glimpses of a Fisher too. They really work on red squirrels.

The Canada celebrations were lots of fun this year! We had a great fireworks display and picnic on the beach the day before Canada day and planned to attend the dinner at the curling club the next day. We were going with Mike and Melissa. When we got to their cottage on the way to the dinner we realized how blisteringly hot the day was shaping up to be! After a short discussion of how hot the sheet metal curling club was going to be (there would be no need for sterno under the chafing dishes!) we decided that it would be more fun to sit in the lake with a cold gin and tonic and have burgers, dogs, and Kraft Dinner! We have just the venue for that too.

The lake was the perfect place to hangout! Also in attendance were Cubby, Riley, Bart, Griffin and Kevin. Griffin did a lot of swimming. The Cub was running around like a young dog! The only problem was that he is deaf and blind – Mike got a great deal of exercise heading Cub off from the “Cliff of Death” and the “Surf of Doom”. It kept us all in stitches and the Cub seeming to be having a great time. I thought the “Dog Days” were in August. We soaked in the lake all afternoon and again altered our plans to cook on a beach fire in favor of hightailing up to the lodge. As I said earlier the mosquitos are as bad or the worst I have seen them in years! (word to the wise to guests arriving later – bring repellant, thermo-cells, and mosquito coils!) It was a great decision and we enjoyed a sumptuous repast!

The July holidays are over and the and the weather is gorgeous the weeds are growing nicely in the lake but the minnows don’t seem to have schooled up in them yet. So we are having a fishing transition. My garden is doing very well – even with the miserable May. It seems like the extremely heavy snow pack last winter has protected my bonsai and the daylilies and roses are doing great this year too! Mountain laurel and Sheep’s laurel are notoriously difficult to transplant. Its a fact but after about 15 years of soil amendment, mulching, very judicious pruning and several lectures about the finality of death my Sheep’s laurel has responded! I think it was the psychotherapy.

Check out those abundant clusters of blossoms! I don’t think he’s despondent anymore.

Here’s one of my favorite bonsai – a white cedar I’ve been working with for a few years. Its starting to get it mature crenulated bark making it look ancient.

Here is one of my older tamaracks – the exposed roots are getting really prominent and the needles are beginning to miniaturize. Very cool! 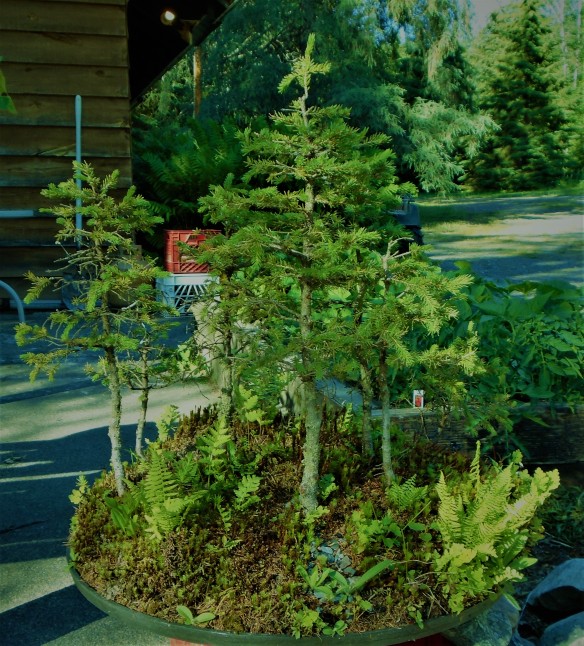 Here is a crowd favorite – the Spruce Grove – I look at it and just say “MEH”.

Ok here’s the part of the blog that all of you have suffered through the above drivel for – The fishing on Firth has been slow for the last few days as the water temps quickly rose. Things are stabilizing and I expect great things in the next couple days. As I was taking the fish guts out of Phish Phry’s Philet place I noticed a school of about 2 dozen 12″ bass dabbling about in the shadows near shore. They were spooked and took off a couple feet before they settled back down to grabbing bugs off the surface. I assume they aren’t hanging out under the docks for good reason!

4 thoughts on “Summer Is Definitely Here…”